Battle of the Bands Rules

If your band does a good job promoting and performing on a Gorilla  Music Battle of the bands, we will book your band on more Gorilla events such as local showcases or festivals. We book shows and festivals in over 65 clubs across the country and can offer your band the help it needs.

Each battle series consists of one first round show per band and one finals round. Generally, there are 10 bands in each battle. 2 winners from each qualifying round battle will advance to the finals round. All bands play a 30 minute set and must bring their own gear (instruments, amps, drum set). The club will supply the P.A. and mics. (This may vary from venue to venue, so ask your Gorilla agent for details.)

We speak to over 1,500 local bands every week. Gorilla Music is in a unique position to learn the industry’s best promotions ideas and pass them on to your band. Our agents are promotional experts who will always be available to advise your band. We also offer professional resources to help you network and earn recognition through proven techniques. Please refer to our Artist Management page and check out our Band Coaching Videos for more information regarding our other services.

Each band is provided discounted tickets to sell to fans, and you are encouraged to sell tickets to increase your chance of winning and to help ensure a good crowd for your performance. However, you are not required to sell tickets nor buy any tickets. Occasionally we will even have a group that sells 0-5 tickets. This is OK, but not recommended. As an unsigned local group networking is the strongest promotion tool available to you, far more effective than anything else.

Time slots are then determined at check-in, based on each band’s ticket sales. Check-in is exactly 90 minutes before the show time printed on your tickets. Turn in all ticket money and unsold tickets at check-in the day of the show. It is important that you check in on time or you may not be able to play.

The bands that sell the most tickets play later in the better time slots and the band that sells the most tickets will have the opportunity to headline the show and play last. The band that sells the least tickets will play first. This system helps motivate everyone involved therefore rewarding all the groups with a bigger turn out and we believe that the bands who work the hardest should get to play in front of the biggest crowds. Its important to understand that when your groups does a good job and sells a bunch of tickets your band gets the opportunity to play next to other groups that have also done a good job bringing fans to the show.

Successful bands are given opportunities to perform in future concerts with Gorilla Music as they become available.

The audience votes immediately after the headlining band’s performance. Remind your fans to stay until the end of the show to vote for you! The two bands receiving the loudest crowd response during the voting will advance to the finals round. The later your band plays, the better chance you have of winning. To get a later time slot, make sure everyone you know and everyone you meet knows about your group’s performance. Be considerate of other bands by getting on and off stage quickly and stay for the whole show to vote and to support the other bands. This is not a typical show! The crowd is largest at the END of the night, while all fans wait to vote.

What You Can You Expect

Your Gorilla Agent will call you every week to help prepare for the event. Our graphics team designs a professional flier for every event. If your band is headlining, we will design the flier around your band. The day of the event, our local event coordinator will meet you at check in to make sure the event runs smoothly. Our staff consists of musicians, artists, producers, former club owners and promoters who understand your band’s challenges and goals. Please take advantage of our experience and contact us any time!

Why the Battle of the Bands?

The Battle of the Bands has become extremely popular, and groups are signing up all over the country, and for good reason. These days, battles are better attended than most local concerts, since people love going to exhilarating events. When a local show is turned into a big event or a battle, then people are more interested in going, because they know it’s going to be exciting and very crowded.

The Battle of the Bands is widely known for having huge turn outs, which is a big part of the attraction. It’s not unusual for a finals round of the battle of the bands to attract seven or eight hundred people. A regular local showcase is sometimes fortunate to draw a few hundred people.

The crowds for our battles go crazy, and scream their heads off. So when a group wins a battle of the bands in front of a screaming, sold-out crowd, the way their fans, friends, and followers perceive their band is dramatically changed forever.

Then the winning band’s friends usually go around town and tell everyone they know how great their friend’s band is and how they just won a battle of the bands. They will usually describe how the place was packed, and how hundreds of people were screaming like crazy. These fans become a marketing team for the winning band, spreading the news everywhere.

In addition to great prizes, the winning group is able to add this new achievement to their bio. A bio is really just a resume of sorts for groups to show other clubs, producers, or potential managers. When people in the music industry start hearing that a group won this event, or opened for that band, or that they’ve sold a bunch of records, they start paying attention.

A Gorilla Music Battle can grow a group’s fan base, and help them gain the respect of close friends, fans, and other important people, while improving their bio dramatically. Do not under estimate the influence a battle of the bands can create.

Gorilla Music Battle of the Bands are Judged by Crowd Response. Here’s Why: 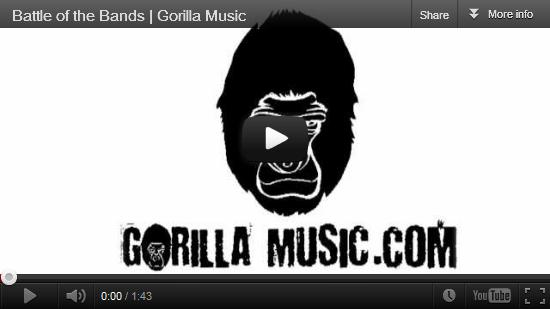