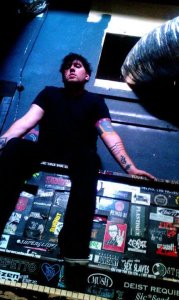 Lance Waste is an artist manager, songwriter, producer, engineer and the founder of Heart Riot Records. He began his career in the music industry by founding 10-34 Records in Cleveland, OH. The record label launched three artists to major record labels and opened The 10-34 Concert Club in Cleveland, OH before relocating to Brooklyn, NY.

Waste has toured over 700 dates in eleven countries with his band, Darling Waste. He founded The FOCOTheory Agency, a full service artist management and coaching service in 2006. He relocated the company to England in 2009, partnering up with Yellow Fish Recording Studios. After FOCOTheory was purchased by Gorilla Music in 2012, Waste launched Heart Riot Records in his hometown of Cleveland, OH.  He has written music for several major record label artists including Freeway and Lil Wayne, produced over 300 albums, has scored several film soundtracks and works with recording studios in New York, Ohio and Brighton, England.